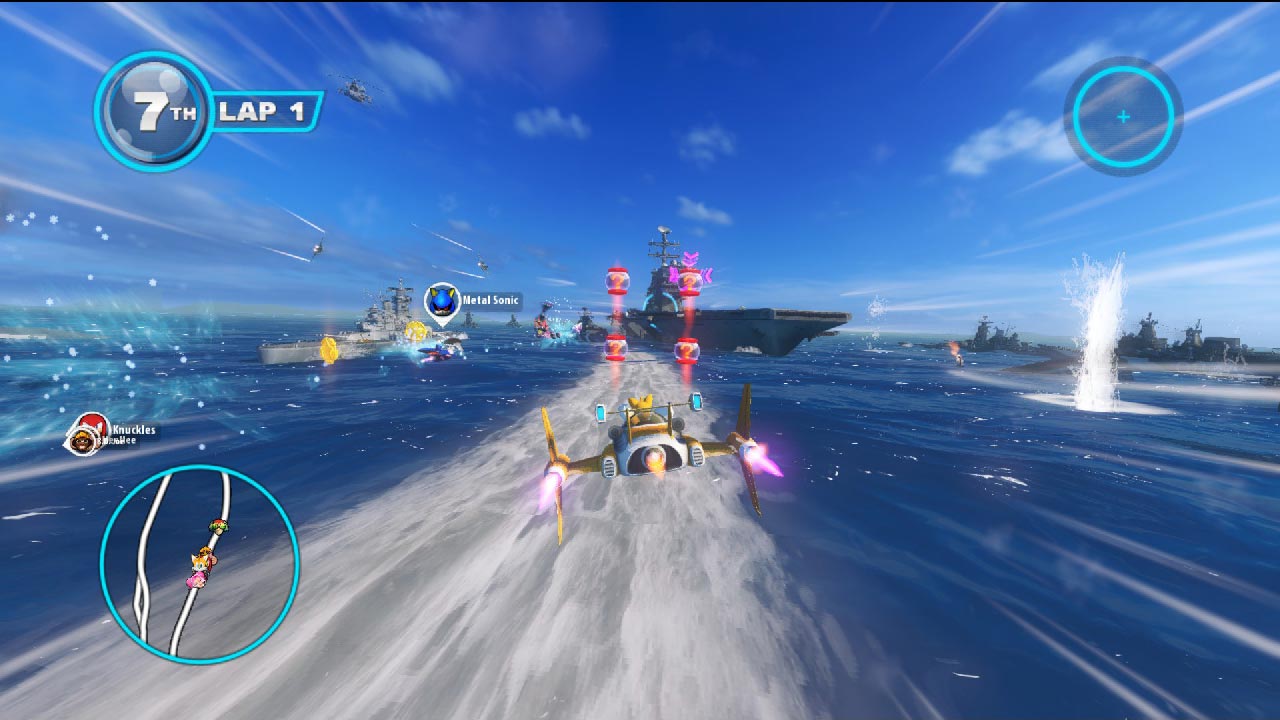 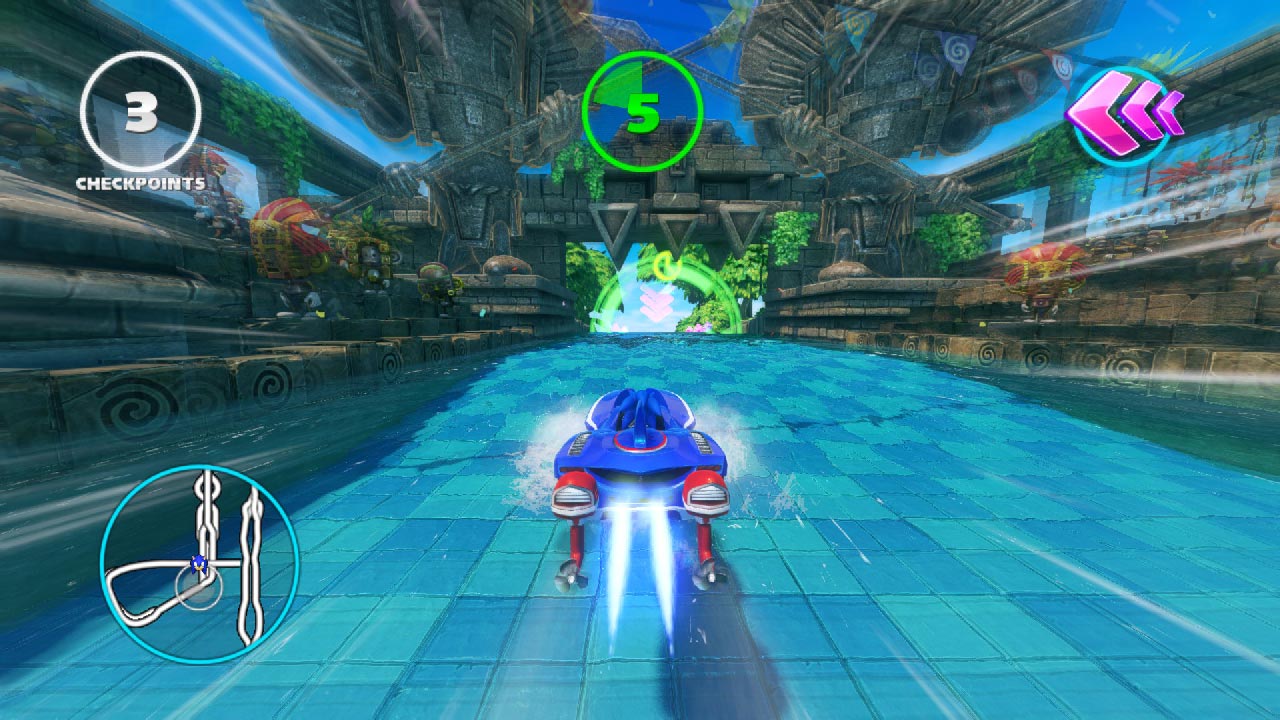 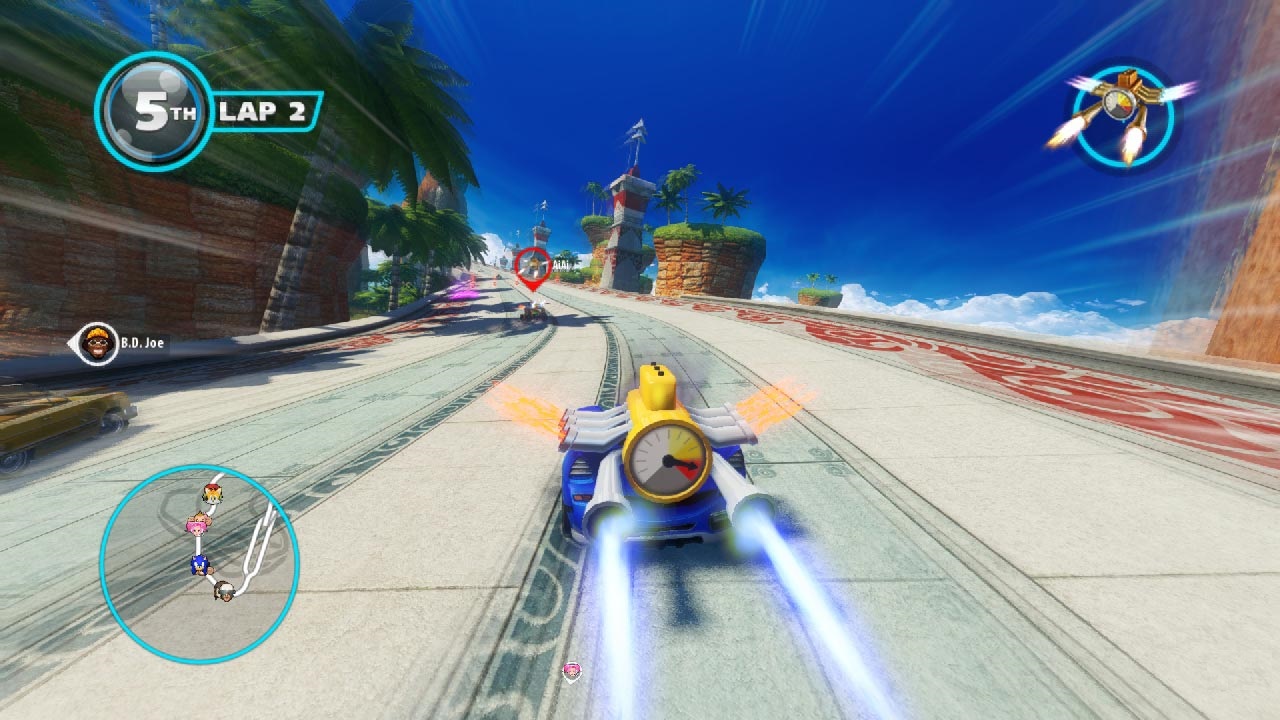 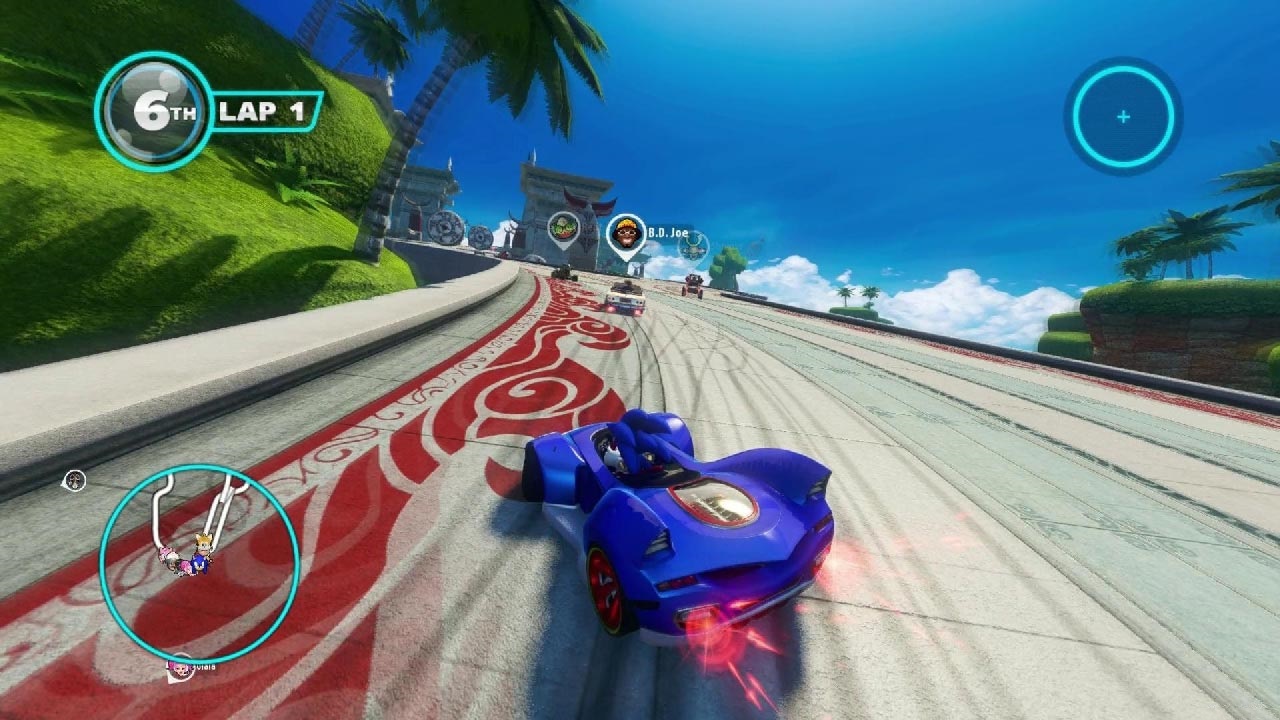 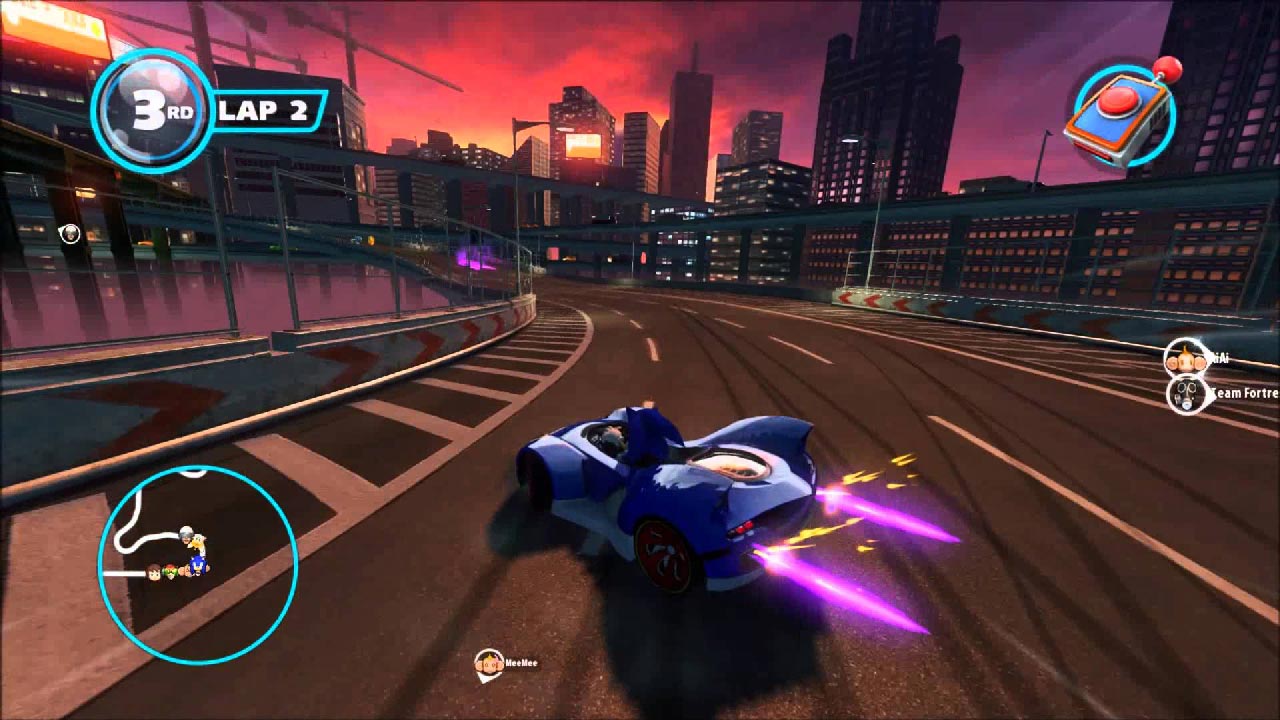 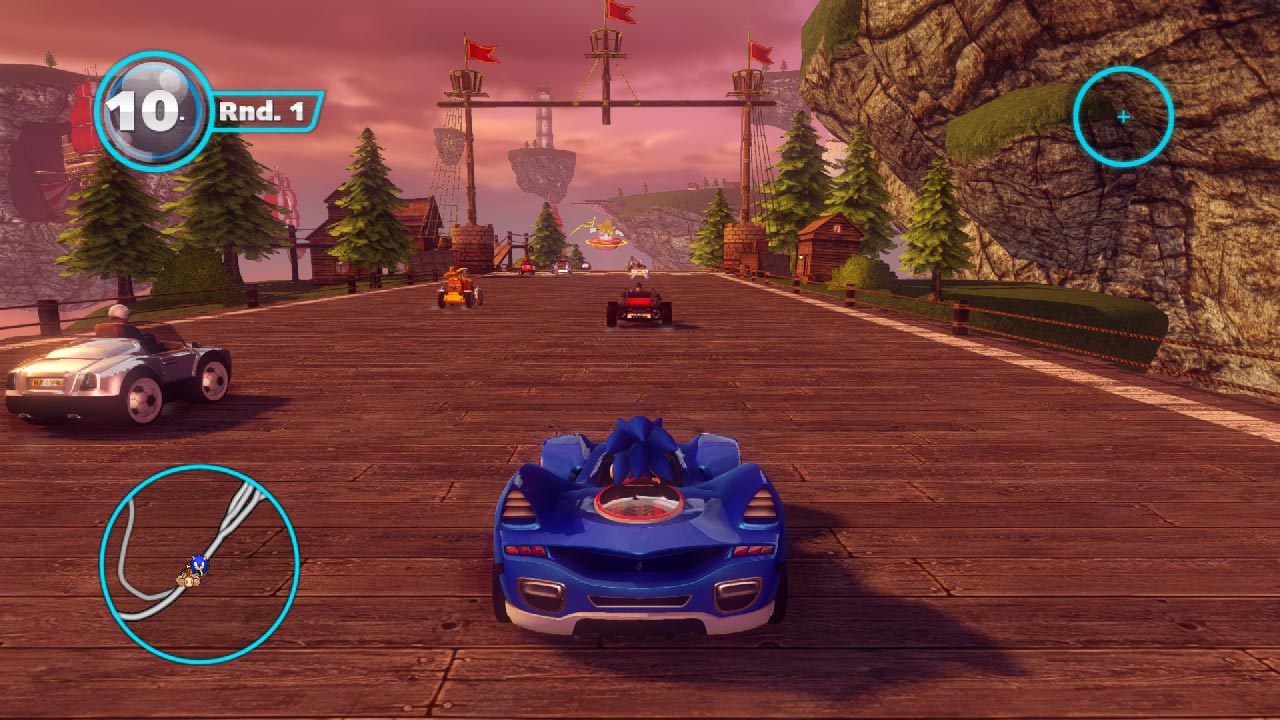 AlternativA information about the seller and his items
offlineAsk a question

ATTENTION! This product is intended for use only in Russia. In other regions will not work.


The famous Sonic has no equal in speed. But in Sonic & All-Star Racing Transformed, he will have to make every effort to prove this, because the entire stellar cast of SEGA game heroes enters the track. Take part in supersonic races on incredible fireballs that can easily move on the ground, on water and in the air. Hone your racer skills - master drifting, afterburner and aerobatics. And do not forget about weapons and superpowers. To be the first to come to the finish line, all means are good! But remember, you should be afraid not only of other racers. The track itself will surprise you more than once during the race: the roads will collapse, the water spaces will dry out, and new sections of the path may appear where it was impossible to pass a second ago. The amazing ability of fireballs to adapt to the landscape will come to the rescue - at the request of the pilot, he becomes a boat on the water, an airplane in the air and a car on the ground. Find all the alternative paths, follow the path along an ideal path and cross the finish line first!

• You will find the most unusual race. Each participant has their own unique car, which, at the request of the pilot, can turn into a car, boat or plane. Each form needs its own approach to managing, and to succeed, you will have to master them all
• The star cast of Sonic & All-Star Racing Transformed includes over two dozen famous heroes. Where else can you see how a blue hedgehog, a monkey, a pirate and a dwarf with a huge ax converge on one track?
• The race continues on land, in water and in the air along 16 dynamically changing tracks, decorated in the style of the famous SEGA games. Look for workarounds, collect bonuses, avoid dangers - the only way to achieve victory
• At your disposal - an extensive arsenal of destructive weapons. However, you will have to try and learn how to aim, shoot, dodge and block the attacks of opponents. In the game, there was a place for special moves, which are now even cooler than before.
• It´s time to get even with old rivals and challenge new ones. The network mode of Sonic & All-Star Racing Transformed will allow eight riders to go on the same track at once. You are waiting for a variety of challenges, including a grand prix, battle arenas and even an incredible world championship

1. You need to download and install Steam http://steampowered.com/download/SteamInstall.msi (if not already installed)
2. Launch the Steam client
3. Create a new Steam account or log into an existing one
4. Go to the "Games" section and select "Activate on Steam"
5. Enter the activation key you purchased
6. After that, the game will appear in your list of games and it can be installed

ATTENTION! Before buying, please check the system requirements of the game and other parameters that interest you (they may change with time). This can be done on the sites Steam / Uplay / Origin or the official website of the publisher. Goods purchased by mistake, as well as unsuitable for system requirements or region of activation, can not be returned and exchanged!

Dear customers! Convincing request, if there are any problems with the purchased goods, do not leave a negative feedback immediately. Write us a message in the correspondence (the purchase page on the site Oplata.info). We will try to respond to your message as soon as possible and promptly solve the problem. We draw attention to the fact that the basis for the exchange or return of the purchased key (key), which gives an error when activated, can only be VIDEO RECORD of the purchase process and subsequent attempt to activate it (mandatory condition - the record should not contain editing features).

We will be grateful for every positive feedback you have left after the purchase. Sincerely, the project team "AlternativA".