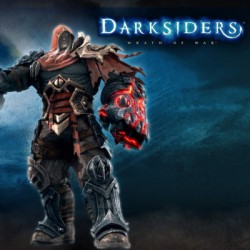 Yielding to the false tidings of evil forces of the end of the world, one of the four horsemen of the apocalypse, war, accused of violating the sacred law and provoking a war between Heaven and Hell. The incredible battles that took place during that war, won by the forces of evil - and they also demanded power over the Earth.

The war was brought before the Board of molten and was accused of committing their crimes and stripped of all his powers. Dishonored and standing on the brink of death, war was only able to return to Earth to find the truth and take revenge on those who really provoked the conflict.

Pursued by vengeful group of Angels, War will join the side of Hell, specify the warring alliances on each of those creatures for which he hunts and go through what is left of the earth to take revenge and to be justified.

The license key from "Buka to activate the game Darksiders ™ (steam)
Only for: Russia and CIS