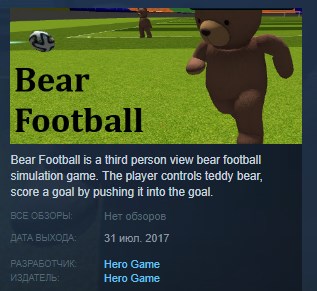 SteamMarket® information about the seller and his items
onlineAsk a question

https://store.steampowered.com/app/674570/Bear_Football/
💎💎💎💎💎💎💎💎
Bear Football is a third person view bear football simulation game.
The player controls teddy bear, score a goal by pushing it into the goal.

1. You need to download and install Steam http://steampowered.com/download/SteamInstall.msi
2. Go to your account or register a new one.
3. Go to the "My Games" and select "Activate via Steam ...", and enter the key received after payment.
4. Once activated, the game will appear in the game list (Library) and you can download it